The store will not work correctly in the case when cookies are disabled.

We use cookies to make your experience better. To comply with the new e-Privacy directive, we need to ask for your consent to set the cookies. Learn more.

Be the first to review this product

General Mackmyra Original Portion is a new portion snatch from Swedish Match's Master Blenders Lars Jonsson and Mattias Schyberg. This time, in collaboration with Angela D'Orazio from Mackmyra Whiskey, they have developed a new snus that combines the two flavor traditions of General and Mackmyra Svensk Ek. The snus has a tobacco-flavored taste, inspired by both Generals and Mackmyra's taste palette. Low-key tones of fruit in combination with cedar and oak provide a tradition-based taste that surprises. 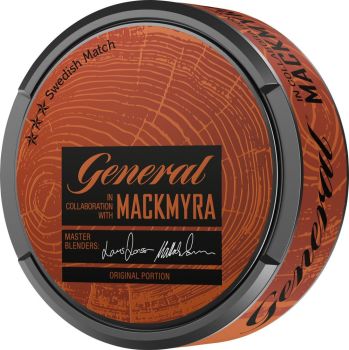 General Mackmyra isn’t the first whisky-flavoured snus, but it marks the first time Swedish Match collaborates with an established whisky brand. The recipe for the original snus has remained the same since 1866. Mackmyra has made Swedish whisky since 1999. The combination of the two flavours results in a snus with a pronounced tobacco taste and distinct notes of whisky.

A recipe created out of a single man’s endeavor for perfection. Over 150 years ago, Johan A. Boman created the first pinch of General, a flavor revolution at that time. General has a large range of products in Sweden and is also spread internationally. Swedish snus General is a full-bodied snus – a blend of more than 20 tobaccos topped with a drop of bergamot oil. This creates a strong flavor that is spiced with a touch of pepper and citrus. The General family contains a lineup of many different varieties: Loose, Portion, Long, Mini, White, Strong, Extra Strong and Onyx. While their formats differ, they all share the typical General-flavor base and are packaged in a distinctive General can.

Throughout its 150-year history, General has always been a leader in snus developmentBy 1985 a revolutionary invention, the portion pouch, was introduced.. Next, in 2003, General White Portion was launched as a snus that doesn’t drip in the same way as original portion snus. General Onyx was introduced in 2005 as a new alternative in the General family with its graphite black portions, presented in a formation that Swedish Match calls Star Formation®. Today, just as it was 150 years ago, General guarantees well controlled quality – a snus that keeps the tradition of Johan A. Boman’s work.

Reviews
Write Your Own Review
Customers who bought this product also bought: